Is a high energy performance that features seven stand-up comics from 7:30 pm to 9pm. An hour and a half of fun you should not miss. Your host, Sean McCarthy, brings decades of experience locally and nationally with comedy to our venue. The show starts promptly at 7:30. Sean gives 15 minutes upfront to warm up the crowd, get people set, tell a couple jokes, interact with the crowd, he does some of his own bits, and then starts bringing on the comics. You get 7 to 10 minutes each with a handful of really good local comics and some national talent that stops bye. Every week there is a different lineup of comedy talent. The production rotates through about twenty different people that are featured each month. Every Tuesday night is a new assortment of local and national people on stage. Our comics are funny even if they are edgy or use foul words, they're not offending anyone. Everything is done with love and wanting to just be funny and entertaining for that one night.  It's that simple. Everyone is hysterically funny. You're literally going to hurt from laughter when you leave. There is no cover charge and there is no drink minimum. The show does fall on Taco Tuesday if you want to grab a delicious meal and a table for the show.

Who are these comics at Brigett’s

We have a handful of newer comics that are not as proven yet. And then we add a couple of those guys with a couple of the regulars, plus that night’s featured performer. We have amazing local regulars that are just fantastic on stage. They should be bigger than they are now. They will be at some time soon.  Sean connects with some touring comics come through and like throw down for like 15-20 minutes. It is good to have friends you know in the comedy business. We had Jann Karam at a recent show. She was on Seinfeld, Curb Your Enthusiasm, David Letterman and like The Tonight Show with Johnny Carson. “She's been around a minute and a friend of mine” Sean McCarthy. Jess Wood is coming in for a show. She is from LA, and she will appear on stage tomorrow night. We will get a big name or some touring comics coming through, and they will throw down for like 15-20 minutes.

Comedy is strong in the Valley of the Sun, which is just big for anyone in the area that enjoys live entertainment.  There are four or five comedy schools that have a stand-up comedy class in the metro area. At Brigett’s we invite a handful of those who are really funny to show you what they have in a seven-to-ten-minute spot. We currently have about 20 regulars that rotate through our show. The new comics are good enough to win an occasional spot on the stage.

The comedy show has been going on since 2009. From 2009 to 2019, John Henry, a friend of Sean, ran the room for 10 years. He was going to have a farewell final show and then COVID hit. The show took a hiatus until the city allowed us to open again.  John started the show again, but after ten years, he was ready for a farewell show on May 4th, 2021. Originally in 2009, John said, “Hey Sean, would you help me run this new show at Bridgett’s? I like the way you run your show. (Sean had a show at The Icehouse Tavern predating John’s, from 2009 to 2014) and we were/are friends.” Sean replied “John, you're fine, you can do it by yourself, I believe in you, just do what I do you'll be fine?” John said, “I'm doing what you do, but I'm doing it better” and we all laughed. Even business deals in this industry should be fun. Sean is the emcee and took over the booking and all facets of running the show for the last year.

“I know it's rare and wonderful, and this is one of those rare, wonderful, good things.” -   Sean McCarthy 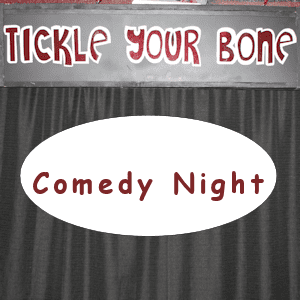 Sean has been doing stand-up comedy all his life. Everything just comes together at Brigett’s. The show is just flowing. The comics love the venue and the crowd. The feedback from both sides of the stage is simply great. The audience is laughing, and the comics love how they are treated. The energy in the room is a real treat. It is rare when everything just clicks, but it happens here. Sean is not alone. He has a one-person tech crew to handle lighting, sound, computers, and the non-artistic stuff.

Brigett’s Last Laugh is the place for comedy on Tuesday nights at 7:30. Come meet new people. Eat some great food. Have a drink and make the night the highlight of the work week.

Visit us for the Best Happy Hour in town!

Gonna have some fun tonight!